via MEET THE MUSICIANS OF CR: KARI FLESKES

Happy Father’s Day to all you great Dads out there. Here is a heartfelt song co-written by Lee Kweller and Terry Bell and sung by Terry. Hope you enjoy it. It’s one of the songs in the new movie Christmas Ride, which is looking for theatrical distribution. https://soundcloud.com/terry-bell-songs/song-in-christmas-ride-film-if 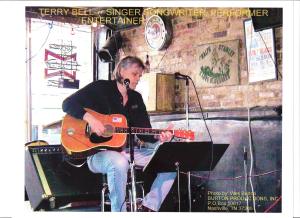 From the first time Terry saw the Nashville sky line in 1988 he knew this is where he was meant to be. The doors on music row started opening right away. He began co-writing with staff writers from Loretta Lynn’ publishing company Coal Minors Music and Tree (Sony/ATV) music publishing. He learned the craft of songwriting from some of the best in the business. He met Jennifer Pierce who wrote “That Old Wheel” for Johnny Cash and was writing with Garth Brooks when they met.   He continued to write with new writers and up and coming artist’s when he met soon to be country star Tracy Lawrence. They became good friends and started writing together. It was Terry and Tracy’s songs that helped to get Tracy noticed when he did a showcase at the Blue Café.

As as a seasoned songwriter he has had great commercial success in the Positive Country Market, with 4 Top 10 singles and a 1# song to his credit.. He co wrote the song “John Wayne and Jesus” that was recorded by Michael Grimm, America’s Got Talent winner for 2010.  The song was nominated Song of the Year by the Christian Country Music Industry in 1996 .The song crossed over to mainstream country radio and helped to earn Michael a “Star of Tomorrow Award” from CCMA voting members that year

In the 70’s his band “Dakotah opened shows for Steppenwolf, Elvin Bishop, Head East and Beautiful Day and was a regular performer at the Oregon Country Fair.

He was fortunate to work with Keith Olsen, the producer of Fleetwood Mac, White Snake and Rick Springfield, along with many great songwriters, artists and producers throughout his career that helped Terry develop into one of Nashville’s best “Song Men”, skilled with the ability to choose the perfect song for any project. He was instrumental in finding a song for country super star, Faith Hill’s album, “It Matters to Me”.  The album has been RIAA Certified as having sold 5.7 million records since it 1995 release.

In 2013, Terry Bell is an industry professional in every sense of the word. As a songwriter he has had great commercial success, with top charting singles and was recently promoted by Ron Cornelius owner, the Cornelius Companies and Gateway Entertainment, Inc as the Creative Director, where he continues to write new songs, work with and mentor new writers and artists.

“So pleased to be including TWO of Terry’s hit songs, in the new movie Christmas Ride:

“If He Were My Dad”  performed by Terry  and  “You Put the Wings on My Dreams”  written by Terry Bell and sung by Leigh Ann Agee.”  —  Karen Francis, Director

Two time Pulitzer Prize winning composer Ned Rorem says of Mr. Francis: He plays the right note with the right tone at the right time. (what more can you ask of any performer?) And with this, he adds that indefinable element of himself, which is the magic of all true interpreters.

Mr. Francis plays in recital through out America and has eight cds available including the world premiere recording of Mr. Rorem’s Eight Etudes for Piano on the cd entitled The Americans. The Los Angeles Times raves of Mr. Francis’ playing: consistently absorbing whether in lyrical repose or propulsive fury.

Mr. Francis is a recording pianist on the films  Pursuit of Happyness, Elegy and the recent re-make of Fame. He has composed music for both film and television and his piano performance can be heard in many major motion pictures.   Mr. Francis is also the creator, composer, musical director and executive producer of the runaway smash hit musical BARK!

BARK! finished a two year run in Los Angeles in August 2006 which was the 3rd longest running production in Los Angeles intimate theatrical history. BARK! was selected critics’ choice by the Los Angeles Times and The Chicago Tribune and  received over 30 critic’s pick or rave reviews. This musical comedy presented from a dog’s perspective  also received the endorsement of The Humane Society of The United States–the first time ever the society endorsed a commercial entity.  BARK! has raised approximately one quarter of a million dollars for animal charitable organizations.

The soundtrack cd recording of BARK! The Musical featuring the original Los Angeles cast is available at: http://www.barkthemusical.com

Mr. Francis recently directed the Jason Robert Brown musical Songs For A New World at the Tennessee Williams Theatre under the auspices of the Key West Symphony and also appeared as a major soloist in the orchestra’s presentation of PianoMen.

He co-created and musically directed an original musical revue entitled Naughty But Nice – an intimate evening with the music of Noel Coward and Cole Porter. The show enjoyed a month long totally sold out run at the Asheville Community Theatre in November 2012.

Mr. Francis is currently working on a new musical entitled The Trail of Tears as well as continuing to perform in concert across America.

David Troy Francis was born in Memphis, Tennessee and is best known for his steadfast championing and performance of contemporary American music. Now living in Asheville, North Carolina, he is an esteemed concert pianist and recording artist as well as a respected composer, arranger and accompanist.

His electrifying and critically acclaimed cd, The Americans, features compositions of living American composers including Mr. Rorem. Other eminent American composers represented on this CD are the magnificent Lowell Liebermann, the distinguished Tobias Picker and the excellent Michael Boustead. He has earned raves from composers and critics alike for his compelling combination of pulverizing technical virtuosity and poetic piano artistry.

He has a stellar recording of his performance of the Rachmaninoff Piano Concerto No. 2 in C minor recorded live with the Pasadena Concert Series Orchestra. His popular CD, by george – gershwin reconsidered, is an all Gershwin project including Mr. Francis’ version of the piano transcription of Rhapsody in Blue as well as his newly arranged versions of songs from stage and screen.

He performs frequently in recital including performances at colleges, churches and performing arts venues throughout the world. He has performed for Crown Princess Victoria of Sweden when he performed for the Nobel Prize Luncheon. He gave a totally digital rendering of Rachmaninoff’s Piano Concerto No. 2 for Roland Instruments on their digital concert grand. He performed the same work with orchestra for the distinguished Lindenwood Concert Series in Memphis, Tennessee and with the Pasadena Concert Orchestra. Mr. Francis played in Florence, Italy, at the University of Pepperdine in December 2013.

His performance of original compositions as well as classical pieces can be heard in major motion pictures starring such luminaries as Sir Anthony Hopkins, Chris Rock, Tim Robbins, Susan Sarandon and Goldie Hawn. Mr. Francis has composed music for television including the animated children’s series Extreme Dinosaurs and movie of the week Hollywood Wives. He is also the composer for the documentary The Age of Elegance and the mock-a-mentary Dogs.

David studied piano performance with Don Moore at Rhodes and also Karen Knecht and Eduardo Delgado. He has studied song writing with Gloria Sklerov at UCLA.

He is the artistic director of The Modern American Music Project, a 501(c)3 non-profit that produces quality productions of modern American music.
Mr. Francis accompanied and musically directed TMAMP’s production of Jake Heggie and Terrence McNally’s critically acclaimed opera Dead Man Walking in Asheville, NC, April 2013.    He is one half of the piano duo of Francis & Weiser who together play two piano and four hand concerts.

Mr. Francis founded and continues to support The Marguerite Francis Music at Noon Concert Series in Bartlett, Tennessee, at the Bartlett United Methodist Church. This series – named after his late mother – is designed to nurture and support quality musicians and provides performances every Wednesday at noon from September through May. The series recently completed its fourth year and is financially self supporting.

He volunteered and played at the very first Garlic Festival in Gilroy, California, while he was a

student at Gavilan Community College in Gilroy. Since then Bobby has played in venues of just

about every size from living rooms in California, Washington and Tennessee and churches

Nashville, the River Arts Festival in Memphis. He was honored to sing for the Chief’s Council for

the Mississippi Choctaw Nation in 2012.

(Americana) that should be remembered.

Check out samples of his music at: www.Reverbnation.com/Bobbyoneal

NEWS FLASH: Adam  will be debuting this Thursday night, July 11th, outdoors in a new country band on Beale St, from 7-10 pm.

Adam, at the age of 3 began playing piano with 1 finger. At 6 he was performing in churches around the  Memphis area and at the Strand Theater in Millington, TN.    Adam, at 15 played keyboard to produce drums and bass on the Quinn’s Live CD as well as the piano on all songs.   His song Eternal on the CD is an original composition.   At 18, Adam recorded a Gospel piano CD at Ardent Recording Studio  in Memphis titled, Gospel Piano.

Today at 28 Adam is the pianist at Big Creek Baptist Church at Millington, TN and as a professional pianist performs several nights a week at Silky Sullivan’s on world famous Beale Street. Adam plays in his own distinctive style but has a definite touch, of his world famous cousin Teddy Riedel, a piano player and songwriter who played with Johnny Cash, Elvis Presley, Jerry Lewis and many others as a studio pianist at Sun Studio, Memphis.  Elvis, in 1961 recorded and released the song ” Judy ” written and released by Teddy Riedel in 1960.  Adam has performed in concert with his cousin Teddy and it makes great musical entertainment.

Adam lives in Bartlett, TN with his lovely wife Shelby and their 3 year old daughter.  Adam expresses his gratitude to the Lord Jesus Christ and his humble appreciation to all of the people who give him such delight to hear him play.

Contact for Adam  through this  email, reference Adam:  adquinnq@yahoo.com