To book in your cinema, contact producer Karen Francis kfrancis427@gmail.com

The CHRISTMAS RIDE film is produced by Art Promotions with cooperation by Yarbrough Media Productions.

Additional trailers and clips may be found at the http://www.youtube.com/blessings427 channel.

Source: AT THE STATION–A CLIP FROM CHRISTMAS RIDE MOVIE

The feature film Christmas Ride is rated PG by MPAA.  A DCP version exists of this full length movie for theatrical distribution. The film is produced by Karen Francis, owner of Art Promotions with cooperation of Yarbrough Media Productions.  More information about the film is at www.artprofilms.com.

Here’s a fresh website for CHRISTMAS RIDE with new Behind the Scene Photos & Videos on it. http://kfrancis427.wix.com/christmas-ride-2015  Cinemas, contact us to book this fun feature movie in a cinema near you now.

(Memphis, TN)   This new movie, CHRISTMAS RIDE,  is listed in The WRAP among the eligible films for the 2015 Academy Awards.  Here is the link:   http://www.thewrap.com/oscars-announce-323-films-eligible-for-best-picture/

Christmas Ride also recently was awarded the Dove Seal of Family Approved for Ages 12+.  More about the movie at www.artprofilms.com  and www.facebook.com/ChristmasRide. 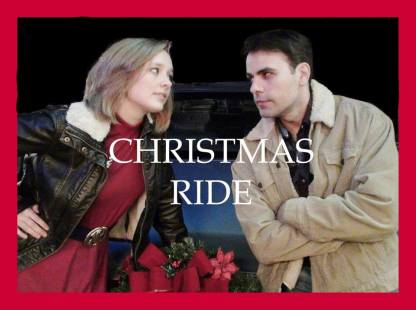 This film was produced in Tennessee by Art Promotions in cooperation with Yarbrough Media Productions with a cast of 68, forty-five % female.

The CHRISTMAS RIDE movie log line is — After hearing a frightening supernatural warning, a woman takes an urgent road trip south during the Christmas holidays with her two kids and a mysterious neighbor haunted by ghosts from his past. She faces dangerous situations and ultimately she learns a heartbreaking truth which tests the limits of forgiveness.

(Memphis, TN) Art Promotions is happy to announce Christmas Ride, an Oscar hopeful, was awarded the gold Faith and Family Seal of Approval for ages 12 and older from The Dove Foundation Review Board LAST week.

This means the Foundation believes that the content expressed makes for the kind of entertainment family members can enjoy together with confidence.   The Dove Family Approved Seal is awarded to movies, DVDs, made for TV movies and specials, books and other entertainment products.

Now celebrating its 20th year as an advocate for family values in entertainment, The Dove Foundation works to encourage filmmakers to make clean movies, and to empower families to make wise choices. As a nonprofit, “keeper of the Seal,” free from commercial pressures, The Dove Foundation has built a brand that is recognized by over 50 million Americans.

The Dove Foundation is a 501(c)3 nonprofit organization and may be found online at http://www.dove.org.

CHRISTMAS RIDE is a moving, dramatic 108 minute feature film: The story line is  “After hearing a supernatural warning, a woman takes an urgent road trip south during the Christmas holidays with her two kids and a mysterious neighbor haunted by ghosts from his past. She faces dangerous situations and ultimately learns a heartbreaking truth which tests the limits of forgiveness.”

Produced by Karen Francis of Art Promotions in cooperation with Yarbrough Media Productions in west TN,  Christmas Ride, starring Brittney Ham and H T Altman with a total cast of 68,  had its first theatrical run in DCP 2K format  at the Music Hall, one of the Laemmle theaters on Wilshire Blvd in Beverly Hills, CA in September, 2014.   This was a week long qualifying run with four screenings a day at a commercial theater.

More about the film at http://www.artprofilms.com A one minute film TRAILER  is at    http://youtu.be/Av3E6UQSwqg .   See more pictures and LIKE it at www.facebook.com/ChristmasRide  for updates.

Christmas Ride is beginning its First Theatrical Run this Friday in Laemmle’s Music Hall 3 at 9036 Wilshire Blvd in Beverly Hills, California. Hope you will see the movie if you are in the area and let your Los Angeles friends know about it too!I think this family friendly movie will entertain you. The movie includes ghosts and angels, miracles and madness, tragedies and truths, and is set in the early nineties, before personal cell phones and the internet became ubiquitous.

It’s the story of an artist, by an artist, on an urgent road trip with her children and a mysterious neighbor.

Click here for  ticket info There are special rates for groups of ten or more at the box office.  Also, teens ages 14 – 18 get tickets for $5.00 for CHRISTMAS RIDE only.

More about it in this recent press release: http://www.prweb.com/releases/Christmas_Ride/LA_New_Movie_Debut/prweb12161402.htm

This article appeared in the Scottsdale, AZ Broadcast Room online June 12, 2014  and 262 other online newspapers from Hawaii to Virginia have variations of it at this time.