CHRISTMAS RIDE is a new intriguing feature film. My company, Art Promotions, located in Memphis, produced it with the cooperation of Yarbrough Media Productions in TN.  A cast of sixty-eight people…

To book in your cinema, contact producer Karen Francis kfrancis427@gmail.com

The CHRISTMAS RIDE film is produced by Art Promotions with cooperation by Yarbrough Media Productions.

Additional trailers and clips may be found at the http://www.youtube.com/blessings427 channel.

(Memphis, TN)   This new movie, CHRISTMAS RIDE,  is listed in The WRAP among the eligible films for the 2015 Academy Awards.  Here is the link:   http://www.thewrap.com/oscars-announce-323-films-eligible-for-best-picture/

Christmas Ride also recently was awarded the Dove Seal of Family Approved for Ages 12+.  More about the movie at www.artprofilms.com  and www.facebook.com/ChristmasRide.

This film was produced in Tennessee by Art Promotions in cooperation with Yarbrough Media Productions with a cast of 68, forty-five % female.

The CHRISTMAS RIDE movie log line is — After hearing a frightening supernatural warning, a woman takes an urgent road trip south during the Christmas holidays with her two kids and a mysterious neighbor haunted by ghosts from his past. She faces dangerous situations and ultimately she learns a heartbreaking truth which tests the limits of forgiveness.

Playing the role of April in “Christmas Ride,” rated PG,  is seven year old (six at the time of shooting) newcomer Reagan Britt Mullins. With only limited acting experience in school and church plays, Reagan took to the filming process quite easily.

This Bartlett Tennessee second grader prepared for each shoot and much to her parent’s pleasure kept up with her studies and didn’t miss a day of school.

When asked about her favorite part of the filming of Christmas Ride Reagan states “I had fun learning from Mr. Jeff (Yarbrough, Director of Photography) and Mr. H. T. (Altman, Principle Actor) and it was fun  having Russ (Russell Walden, Principle Actor) as a movie Brother”.

When asked about her favorite scene, Reagan said “I liked when Russ (Josh) and I snuck away in the Sheriff’s office and throwing leaves on Mr. H. T.  He was so silly”.

Reagan loves to play soccer and basketball and looks forward to starting third grade this fall. She is active in American Heritage Girls and earns badges like crazy.

Reagan has traveled the country with her parents and just returned from a trip to St Louis where she conquered her fears and made it to the top of the Arch.

Learn more about this feature Academy Award Qualified movie (2015) and how to play it at your local cinema at artprofilms.com

These are some of the newer posters for Christmas Ride now.  Would love your thoughts this week.  Try the Poll. 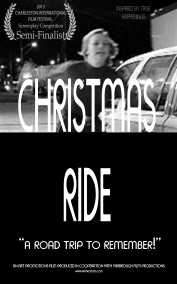 From the first time Terry saw the Nashville sky line in 1988 he knew this is where he was meant to be. The doors on music row started opening right away. He began co-writing with staff writers from Loretta Lynn’ publishing company Coal Minors Music and Tree (Sony/ATV) music publishing. He learned the craft of songwriting from some of the best in the business. He met Jennifer Pierce who wrote “That Old Wheel” for Johnny Cash and was writing with Garth Brooks when they met.   He continued to write with new writers and up and coming artist’s when he met soon to be country star Tracy Lawrence. They became good friends and started writing together. It was Terry and Tracy’s songs that helped to get Tracy noticed when he did a showcase at the Blue Café.

As as a seasoned songwriter he has had great commercial success in the Positive Country Market, with 4 Top 10 singles and a 1# song to his credit.. He co wrote the song “John Wayne and Jesus” that was recorded by Michael Grimm, America’s Got Talent winner for 2010.  The song was nominated Song of the Year by the Christian Country Music Industry in 1996 .The song crossed over to mainstream country radio and helped to earn Michael a “Star of Tomorrow Award” from CCMA voting members that year

In the 70’s his band “Dakotah opened shows for Steppenwolf, Elvin Bishop, Head East and Beautiful Day and was a regular performer at the Oregon Country Fair.

He was fortunate to work with Keith Olsen, the producer of Fleetwood Mac, White Snake and Rick Springfield, along with many great songwriters, artists and producers throughout his career that helped Terry develop into one of Nashville’s best “Song Men”, skilled with the ability to choose the perfect song for any project. He was instrumental in finding a song for country super star, Faith Hill’s album, “It Matters to Me”.  The album has been RIAA Certified as having sold 5.7 million records since it 1995 release.

In 2013, Terry Bell is an industry professional in every sense of the word. As a songwriter he has had great commercial success, with top charting singles and was recently promoted by Ron Cornelius owner, the Cornelius Companies and Gateway Entertainment, Inc as the Creative Director, where he continues to write new songs, work with and mentor new writers and artists.

“So pleased to be including TWO of Terry’s hit songs, in the new movie Christmas Ride:

“If He Were My Dad”  performed by Terry  and  “You Put the Wings on My Dreams”  written by Terry Bell and sung by Leigh Ann Agee.”  —  Karen Francis, Director

Harvey Walden captures the crowd in this photo at the Malco Wolfchase screening of CHRISTMAS RIDE in Memphis Oct 29, 2013.

Christmas Ride is my first Movie Role. I play James. He is a bad guy. I am a Small Role Actor/Stagehand in Community Theater. I have been involved in 55 Plays, 43 of them have been in the Historic Ruffin Theater in Covington, Tennessee. I am employed at Covington Care Center. I have also worked with many Christian Music Artists. I really enjoyed being part of Christmas Ride. It was like being in a big happy Family. I enjoyed cutting up with the fellow actors.  I grew up in Covington and now living in Atoka TN. I am a member of First Assembly of God in Brighton.